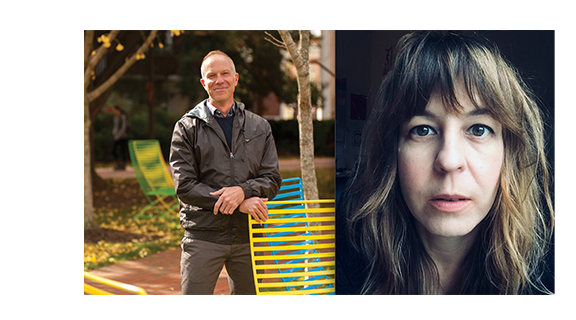 Supported by the Dorothy A. Fowler Trust

Chris Nealon is a Professor of English at Johns Hopkins University. He is the author of The Shore (Wave Books, 2020) as well as two books of literary criticism, Foundlings: Lesbian and Gay Historical Emotion before Stonewall (Duke, 2001) and The Matter of Capital: Poetry and Crisis in The American Century (Harvard, 2011), as well as three earlier books of poetry: The Joyous Age (Black Square Editions, 2004), Plummet (Edge Books, 2009), and Heteronomy (Edge, 2014). He lives in Washington, DC.

Stephanie Young lives and works in Oakland. Her books of poetry and prose include It’s No Good Everything’s Bad, Ursula or University, Picture Palace, and Telling the Future Off. Her latest book of poetry is Pet Sounds (Nightboat Books, 2019). She edited the anthology Bay Poetics, and with Juliana Spahr, A Megaphone: Some Enactments, Some Numbers, and Some Essays about the Continued Usefulness of Crotchless-pants-and-a-machine-gun Feminism. Young is a member of the Krupskaya Books editorial collective.