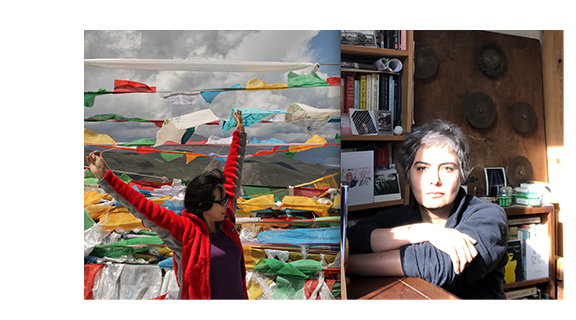 Wang Ping and Ava Koohbor, at Medicine for Nightmares

Poet, novelist and artist Wang Ping was born in 1957 in Shanghai, China. She earned a BA in English from Beijing University before immigrating to the United States in 1985. Ping earned an MA in English from Long Island University and a Ph.D. in comparative literature from New York University. She is the author of over 12 books of poetry, prose, and translation, most recently the poetry collection My Name is Immigrant (Hanging Loose, 2020) and the memoir Life of Miracles Along the Yangtze and Mississippi (University of Georgia, 2018), winner of the AWP Creative Nonfiction Award (2017). Wang's work is deeply rooted in her Chinese ancestry and identity and addresses the complexities of language, culture, and gender. She has also been featured in several multi-media solo exhibitions, including “We Are Water: Kinship of Rivers,” a one-month exhibition that brought 100 artists from the Yangtze and Mississippi Rivers to celebrate water (Soap Factory, 2014), and collaborated with filmmakers and composers on multiple projects. Minnesota Poet Laureate for 2021-2023, Wang is the founder of the Kinship of Rivers Project at Macalester College, where she taught creative writing as a Professor of English for 21 years and is now a Professor Emerita. More at wangping.com

Ava Koohbor is a poet, visual, and sound artist. Her poems have appeared in various publications as well the chapbooks Triangle Squared (Bootstrap Press) and Sinusoidal Forms (Lew Gallery), and the full-length collection Death Under Construction (Ugly Duckling Presse/ Bird & Beckett Books). Her latest electronic music performance was broadcasted online in The Modular World Anniversary Series. Her latest assemblages (Eye of Noir), hosted by Colter Jacobson, were exhibited at Right Window Gallery. She believes that each artist is a medium to transfer the world of possibilities to what is. She is now pursuing an MFA in Electronic Music and Recording Media at Mills College.

The Poetry Center and Medicine for Nightmares