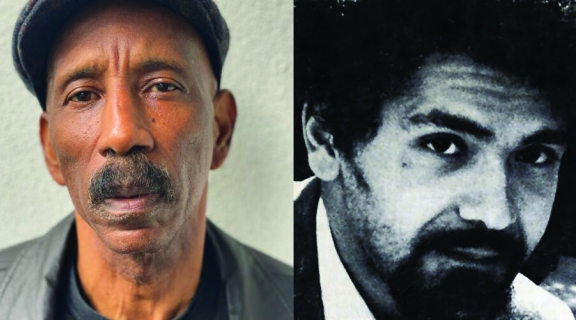 Friends and poet correspondents Will Alexander and Sotère Torregian will be honored guests of The Poetry Center for this special online-only event, each reading from new work and in conversation with one another and their audience. They'll be joined by Andrew Joron, poet and SF State faculty member, as online emcee. Please join us, at 6:00 pm Pacific Standard Time.

Will Alexander works in multiple genres. In addition to being a poet, he is also a novelist, essayist, aphorist, playwright, philosopher, visual artist, and pianist. His influences range from poetic practitioners, such as Aimé Césaire, Bob Kaufman, Andre Breton, Antonin Artaud, and Philip Lamantia, to the encompassing paradigm of Sri Aurobindo’s Integral Yoga, and the Egyptian worldview as understood by Cheikh Anta Diop and R.A. Schwaller de Lubicz. The latter is central to Alexander’s expanding inner range, which has allowed him access to levels of mind beyond the three-dimensional as boundary. He thereby explores the full dimensionality of each word. For him, each word has access to not only the median level of three-dimensional experience, but also partakes of experience on both the supra and subconscious planes. His praxis of language is not unlike the Mayan numerical world, where each letter of the alphabet spontaneously engages in non-limit. Thus, all fields of experience are open for exploration: art, physics, botany, history, astronomy, architecture, and poetics. Alexander’s books include Asia and Haiti, Compression and Purity, Sunrise In Armageddon, Diary As Sin, Inside the Earthquake Palace, Towards The Primeval Lightning Field, Mirach Speaks To His Grammatical Transparents, and three books from New Directions:The Sri Lankan Loxodrome, Refractive Africa, and Across the Vapour Gulf. He lives in The City of Angels. (bio, adapted from New Directions Publishing)

Sotère Torregian notes, in the "Preface, or Last Will and Testament?" to his latest book, In An Era of Pillage (Anon Edition, 2022): "There are many voices as I write. I find myself a stranger amongst them. In a recent Star Trek rerun Captain Jean Luc Picard of the Starship Enterprise finds himself transported in time back to the year 1941. I found myself recognizing those streets — the cityscape, the automobiles, the women's clothes, the bustle of the city when I was born in my first natal birth. My second birth, which occurred at age 17, was by way of French Surrealism...." Sotère Torregian is an American poet, born in Newark, New Jersey on June 25, 1941. Associating early on with the New York School poetic milieu of early 1960s New York City, "admidst the warmth and friendship of such poet pals as Ted Berrigan, Joe Ceravolo, Ted Joans and John Ashbery," he attended Rutgers University, and taught briefly at the Free University of New York and at Stanford University, where he helped establish the Afro-American studies program in 1969. At that time he proposed a kind of American “orthodox Surrealism” based on “reinterpretations of surrealist stands on Revolutionary perspectives in art, poetry, and theology.” He presently resides in Morgan Hill, California.

Torregian, as Dale Smith noted for The Poetry Foundation, "can spin the world without the glaze of irony. This is perhaps what is most surreal about him: he embraces the full force of things with a curiosity and a sincere persistence that helps increase perspectives of the truly strange cultural carnivals of celebrity and loneliness, public action and private pain." (Lives of the Poets: Sotère Torregian, March 17, 2010).