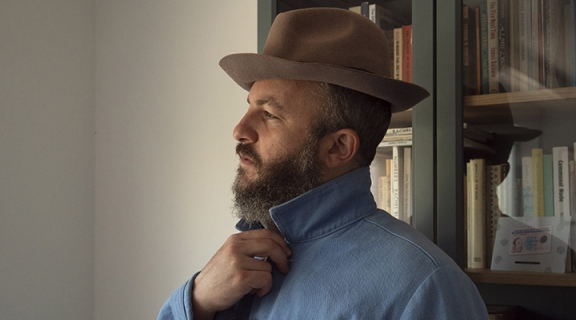 Join us, either in person or via live-stream video, for the 37th annual George Oppen Memorial Lecture, delivered this year by poet and scholar Ariel Resnikoff. The title of Resnikoff's talk — “Among the Heaps of Brick and Plaster Lies”: Toward a Poetics of Translingual Refuse — comes from a line by Oppen's friend and contemporary Charles Reznikoff, in one of many poems he read at this 1974 occasion when Oppen introduced him for The Poetry Center: Charles Reznikoff: March 21, 1974. Resnikoff will also be reading his own poems on this visit, two nights earlier at the same location, together with poet 최 Lindsay | Lindsay Choi. The East Bay Media Center is a short walk west from the Downtown Berkeley BART station.

The George Oppen Memorial Lecture is supported by the Dorothy A. Fowler Trust.

Ariel Resnikoff is a writer, translator, editor and educator. His most recent works include the poetry collection, Unnatural Bird Migrator (The Operating System, 2020), the chapbook, raisin in every bite (Furniture Press, 2022), and with Jerome Rothenberg, the translingual epistolary collaboration, A Paradise of Hearing (The Swan, 2021). His poetry and essays have been published widely and appear or are forthcoming in Boundary 2, Golden Handcuffs Review, The Brooklyn Rail, Dibur Journal, Caesura Magazine and Full Stop Quarterly. Ariel is a translator of Yiddish and Hebrew poetry and prose, and his own writing has been translated into and published in German, Russian, Spanish and French. He has taught poetry, translation, creative non-fiction and multilingual diaspora writing at the Center for Programs in Contemporary Writing (University of Pennsylvania), and at BINA: The Jewish Movement for Social Change. In 2019, he received his Ph.D. in Comparative Literature and Literary Theory from the University of Pennsylvania, and in 2020 he was selected as a Fulbright U.S. Scholar in Translingual Poetics.

George Oppen and Charles Reznikoff at The Poetry Center: